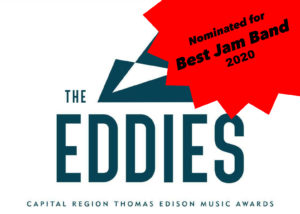 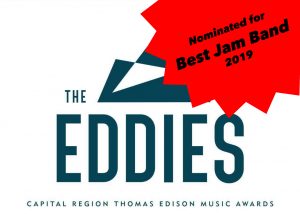 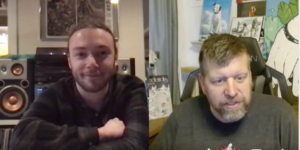 Nice Interview of Gabe by Jim of Internet Magazine Nippertown, 11/9/2021.

https://www.youtube.com/watch?v=5SkpHb9-3Bw
For this week's Artist Series, we decided to contact Albany, NY based band Ampevene. They are a hometown favorite and have been on the rise including releasing a brand new live album this past February 2018. Learn more about the band in thier Artist Series video below! Visit their website: www.ampevene.com Follow Mirth Films: Website: https://mirth-films.com/ Facebook: https://www.facebook.com/mirthfilms/ Instagram: https://www.instagram.com/mirth_films/ Twitter: https://twitter.com/mirth_films
Mirth Films - February, 2018

Proof of Concept in Sight and Sound - Ampevene

"In  the early days of Rock-N-Roll, music  had a formula. Hit makers, the right producers and all the key players and musicians, backed up singers like Elvis Presley and Aretha Franklin. Now let us fast forward a few decades into the future, when bands started to experiment, not worrying about writing hits or time restraints, and focused on concept albums. Example; bands like Pink Floyd, King Crimson, Rush, later Tool and The Mars Volta. In a current world of music dominated by Americal Idol or the internet overnight viral success story of songs like  “Chocolate Rain”. Some think this is the answer to making it in the music business today. But guitarist and vocalist Gabe Stallman had a different plan when creating Ampevene, a very intricate, detailed time machine of sound and this experiment has just begun."

"Complex isn’t always good, but in Ampevene’s case, it’s raw, emotive and highly expressive. The Albany-based quartet will unveil their latest live album, Ephemagoria at The Hollow Bar + Kitchen on Feb. 9 with the helping hands of their friends in Cousin Earth. Having teased fans along the way with the releases of “Valencia” and “Rometheu,”  the complete live effort commands attention from its earliest, distorted notes. Over a 10-track sonic highway, the prog rockers take listeners for a noisy ride as they blend blatant psychedelic rock influences with their own gritty flair and unique cocktail of spellbinding genres.

Branching off of Gabe Stallman’s solo project as a guitarist, Ampevene is completed by Stallman on guitar and vocals, Mack Hogan on bass, Brian Fahey on drums and Ava Smith on keys. Seeing a minor lineup change, Fahey is the current drummer who took over for Darryl Kniffen, the recorded drummer on the album. The first few tracks come as an attack on your senses, kicking off with a myriad of sound and distortion as an 8-minute journey unfolds within “Florida.” While the group is undoubtedly influenced by psychedelic rock before its time, (think Pink Floyd’s Syd Barrett era) Ampevene channels those visceral tendencies and matches them with the gripping mood and scaling of metal progressions and often hard to compute math-rock.

Just when you get settled into a groove, it doesn’t last for long before you’re tossed into new kaleidoscopic arrangements and time signatures. The first half of the album relies solely on storytelling through music before a 12-minute “Rometheu” introduces the first glimpse of vocals on the album, although that’s not the pinnacle of the track. While fleeting, Stallman’s vocals are comparable to the tone and echoing of groups like Circa Survive and the Mars Volta, with the latter covered later on the album. With the first and fourth beats emphasized in each measure, the song picks up speed with compositional mastery as the foursome jerk the steering wheel into fresh segments, a common thread throughout Ephemagoria.

“Hill” comes as a hard-hitter with all the focus placed on tight drumming at the album’s peak with an explosion of sound before introducing the first cover in a somber, slowed down version of Nirvana’s “Smells Like Teen Spirit.” With a new age take on a beloved classic, the warped arrangement and unique style almost makes the song unrecognizable at times, if not for the lyrics. A second cover comes as a crisp version of the Mars Volta’s “Goliath,” mimicking the song’s natural sound and Omar Rodriguez-Lopez’ distinct vocal inflections.

The live album as a whole features classic and never before recorded Ampevene songs as well as covers, capturing the feel of a live performance at The Recording Company in Esperance, NY, and mixed by Tim Lynch with mastering by Alan Douches of West West Side Music. Ampevene has the raw talent of making their multi-segmented tracks seem like effortless jams spliced together at all the right, unexpected times. With the ability to entice fans to try to follow along and eventually surrender to the flow, the quartet seems to have mastered their live presence and execution while diving deep into guitar solos, exploratory jazz segments and thrash metal elements.
<a href="https://nysmusic.com/2018/02/08/hearing-aide-ampevenes-ephemagoria/?fbclid=IwAR3z00eiuqrxblUrXE6Dghg3lN4_fjmFqOUJGRW1KHLUXILtx0CVG6JIjAM">Read more at NYS Music... </a>"

Consider The Source, Felix Martin and Ampevene: PROG Rock Nation at The Hollow

"First to take the stage was Ampevene, a locally based quartet founded by guitarist Gabe Stallman. The band’s roster includes Mack Hogan on bass, Darryl Kniffen on drums/percussion, and Ava Smith on keyboards. Their sound is a self-described eclectic mix of free form frenzy, jagged riffs, and hypnotic rhythms. Ampevene was formed in 2013 and since it’s inception has played Albany’s coveted Lark Street festival in 2015. They also have produced three EPs, the latest of which is entitled Rometheu which the band chose as the opener for the show. It was one of the only times throughout the night they blended lyrics with the incredible instrumental skills of the band. One of the high points of the hour long set in my opinion was the use of imaginative sounds that were crafted by talented keyboardist Ava Smith. They provided a beautiful sonic layer that enhanced the psychedelic musical experience that Ampevene created early in the evening."

Pete Steele, the sadly deceased singer of Type O Negative/Carnivore once said when his band was going to play a Monsters of Rock festival at Castle Donnington, England that his band Type O Negative only had 45 minutes to slay the masses - they then proceeded to play only four songs.  I remember laughing at the time as it was not what you would expect at a festival, but those songs were long and a highlight of the day.  Now, you may be wondering why I am bring up a memory which has absolutely nothing to do with the band I am currently reviewing; well, it is all down to quantity and the length of time that a song.  You see, this is the latest EP from New York Progressive Rock act Ampevene and it is one track and it is just over twelve and a half minutes long.  When I was sent this, the first thought I had was that quote from Pete Steele and I am wondering if this music will have the same effect on me?


Ampevene are actually from Albany, New York and they are guided by Gabe Stallman on guitar and the Ampevene Ensemble are Ava Smith on keys,  Jeff Nania on saxophone (sorry for missing you out earlier, my bad), Bob Morris on drums and Mack Hogan on bass.  Upon looking at their Bandcamp page, only their first release was more than one tracks and their last one 'Ampevene II' was over twenty-five minutes long.  So this is not going to be for your average Joe who is after three-minute pop-factory hits that all sound the same; these cats are aiming to expand your mind and take some of your time as payment (as they are releasing this EP as a 'name your own price' deal on Bandcamp).  From the beginning I am hearing Mars Volta, ELP, Rush, Lionize and early Genesis, plus it almost goes punk at one point.  It is a strong track, going from all out sonic attack to crazy bridge, from random lyrics to a fantastic solo; it does not stay in one style and it is all blended into one glorious song that just keeps giving, it is a strong track and once it has finished, you are wondering where the time went and how did it seem to pass so fast.  I really like this song, it is a fantastic prog song and it goes in so many different directions.  Only flaw, I wish there was more to listen to; but other than that, I really cannot sing its praises any higher.  So Pete Steele needed 45 minutes to slay the masses, these guys took twelve......

4.5 out of five - This is really good, well worth checking out

The crazy guitar riffs and multi-instrument improvisation are awesome and the instruments sound flawless showcasing their melodic riffs. There’s a point where there is a lack of a clear tonal center, and the band just creates a powerful wall of sound. At around 6:07, a slower groove is established without saxophone at first to allow the audience to breathe after the more intense section. It is here where the piano is high in the mix complementing the haunting guitar melodies. The experimentation with the guitar distortion, some organ sounds, and smooth saxophone is quite soothing and fun to listen to. The coolest part of this track is the juxtaposition between musical ideas/styles. It makes the piece dynamic and engaging throughout. The slow section is immediately followed by a short, quicker ending featuring a quick line of lyrics. Rometheu is very impressive from a compositional standpoint as well as a musicianship standpoint. ..”

“Ampevene delivers a highly energetic, atmospheric environment, tearing the borders between every genre at their disposal. Ampevene continues to set the bar high for progressive rock throughout New York, keeping spectators on their heels from their improvisational clash of metal and jazz.”

“Gabe Stallman is the Writer, Producer, and Guitarist, along with playing occasional other instruments for Ampevene. TheAmpevene Ensemble plays all of the music live and currently features Ava Smith on keys, Bob Morris on drums, and Nick Kozak on bass. The second EP titled Ampevene ll (2015) by Gabe Stallman (from Albany, New York) is indeed a great avant-prog..”

All In Time Photography

"Ampevene, a funky quartet of young, talented, musicians recently turned it up and turned it on at The Hollow Bar + Kitchen More often that not, opening acts wind up as a bit of an afterthought, overshadowed by the main event and uninspiring for a crowds. Ampevene, on the other hand, settled in quite quickly and had our heads nodding and feet shuffling in content within minutes. They found their groove and soon enough they had a full house. Definitely some local talent to keep an eye on."

“An example of that modern, contemporary prog at its best: Gabe Stallman's Ampevene EP http://gabestallman.bandcamp.com/album/ampevene-ep (name your prIce)”